Get to know our team here at Tailored CPAs. We are really excited to work with you on your accounting and other financial related issues. 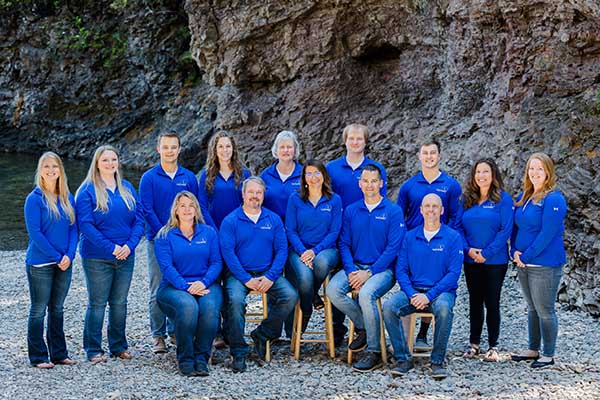 Andy was born and raised in Ishpeming and joined our team in January of 2004. He graduated with honors from Northern Michigan University in December of 2006 and received his CPA certification in February 2010. Andy resides in Marquette with his wife, Jenn their daughters, Harper and Morgan, son Colton and their dog Bohdi. Andy enjoys spending time outside of work camping, mountain biking and anything that includes spending time outdoors as a family.

Jim began working at our firm upon graduating from NMU in 1990. He became certified in 1995, and has been a partner since 1996. Jim's work ethic and commitment to quality have been great assets to the firm. Jim was born and raised in Humboldt and continues to enjoy U.P. activities such as hunting, fishing, and our short season of golf. He resides in Ishpeming Township with his two children, Chase and Nora.

Fred started our business with Robbie in June of 1978. When he graduated from Michigan Tech in 1974, he knew that he wanted to own his own business and began working toward that goal. He has over thirty-nine years of experience in all areas of accounting and is a licensed CPA in Michigan and Wisconsin. Fred was born in Hancock but he now resides in Marquette with Robbie, to whom he has been married for more than thirty years.

Robbie started working part-time with Fred in the business when he started it in 1978. At that time, she was a teacher in the N.I.C.E. school district. She returned to school and graduated from NMU in accounting in 1980. She passed the exam and became a CPA in 1982. Fred and Robbie have been partners ever since. Though she was not raised in the U.P., because of her long-standing residency she considers herself a "Yooper".

Rachel was born and raised in Marquette. Rachel graduated from NMU in December of 2015 with a degree in accounting. In her spare time, Rachel likes spending time with family and friends as well and watching and playing sports – she is on a coed softball team in the summer.

Brad was born and raised in Ishpeming. Brad is a graduate of Westwood High School. He graduated from Northern Michigan University in 2016 with a degree in accounting. In his spare time, Brad enjoys playing video games and spending time with his family and dog, Goldie.

Nick was born and raised in Ishpeming.  He graduated from Grand Valley State University in May of 2020 with a Bachelors in Business Administration.  During his time away from work, Nick enjoys boating, fishing, hiking, and basketball as well as spending quality time with friends and family.

April was born and raised in Lake Linden, Michigan. She graduated from Michigan Tech University in December 2007 with a degree in accounting and became a CPA in February 2012. April joined our team in December 2020. She currently resides in Negaunee with her husband, Jared and 3 children: Landon, Paige and Wyatt. In her free time, April enjoys camping and spending time outdoors with her family.

Tracy is a graduate of Oscoda Area High School in Oscoda, Michigan. She attended Northern Michigan University. Tracy resides in Negaunee with her husband T.J. and their fur baby, Sadie. In her spare time Tracy enjoys reading, fishing, four wheeling and all outdoor activities. She is on the Gwinn coed volleyball league in the summer. Tracy is also a member of the Marquette women’s volleyball league during the winter months

Andrea L’Huillier is a 1995 graduate of Marquette Senior High School. She graduated from Central Michigan University with a degree in corporate finance in 2002. Andrea resides in Gwinn with her husband, Nathan, and her two sons, Peyton and Leland. In their spare time, the family enjoys spending time at the lake, kayaking and camp fires. Andrea also enjoys time spent in her flip flops and traveling to warm destinations.

Carter was raised in Negaunee and graduated from Negaunee High School in 2017. He also graduated from Northern Michigan University with a degree in accounting in December of 2021. Away from work Carter enjoys playing in various sporting leagues and spending time with family and friends. He plays in golf leagues during the summer and also likes to play basketball during the colder winter months.

Frankie grew up in Watersmeet, Michigan and graduated from Marquette Senior High School. After serving in the Navy as an electronics technician specializing in satellite systems and telecommunications, she earned her Bachelor of Science in Information Technologies from the University of Phoenix and joined the team in September of 2010. She currently lives west of Ishpeming with her cat Roman..

Courtney is a 2010 graduate of Negaunee High School. She received a bachelor’s degree in accounting from Northern Michigan University in May of 2015. In her spare time, Courtney enjoys reading, hiking, kayaking and other various outdoor activities.

Erick Roberts was born and raised in Ishpeming and joined the team in August, 2005. He graduated from Northern Michigan University with a degree in accounting in May, 2006 and became a CPA in August, 2007. He currently resides in Ishpeming with his daughters, Fiona and Josie. In his free time, Erick enjoys the outdoors, watching Tiger baseball, and spending time with his family.

Chessie was born and raised in Marquette. She graduated from Northwood University in May 2013 with a degree in accounting. She then went on to earn her Master's of Business Administration from DeVos Graduate School in August 2014. In her spare time, Chessie enjoys hiking, fishing and running.